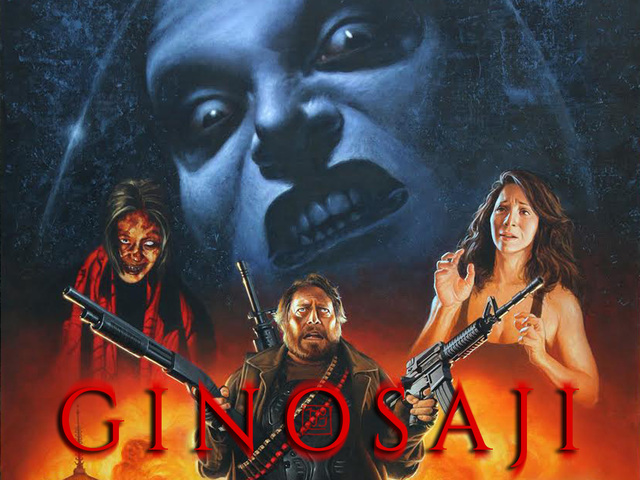 Hello Friends of the Spoon,

I hope all of you are doing well and staying healthy.

The Ginosaji project remains on hold as I continue to care for my elderly Mother, who is suffering from serious health issues.  I've been her full-time caregiver for more than two years now, since my Dad passed away in early 2019.  They were married for 55 years.

She had a terrible fall last August, which resulted in surgery and a week in the hospital.  This made an already difficult situation more complicated due to severe disabilities - she's unable to walk, and cannot take care of herself without assistance.  The pandemic greatly complicated things, with the threat of COVID putting her at serious risk.  But in one way it's simple: her life and well-being are my top priorities.

This has been the most challenging period of my life, but I am glad that I am able to help her.  If it wasn't for her, the Horribly Slow Murderer films would never have existed in the first place, and neither would I.   I am grateful for the messages of support many of you have sent me.

I have resisted posting an update these many months since we had no positive progress to report on the project, aside from the fact that I am surviving and have been managing an insanely difficult situation.  We still fully intend to produce Ginosaji when it is possible, no matter what.

I apologize for the lack of updates.  I understand it may have led some of you to think that the project is never going to get made.  But that is not accurate.

The project is still on hold, but make no mistake - the Ginosaji project is alive and ultimately, it is going to be awesome.

In bits of free time, I'm learning how to do Motion Capture, and have been testing new software which creates digital people who appear incredibly lifelike.  It's called MetaHuman Creator, part of Unreal Engine (the same technology powering the virtual sets in The Mandalorian, and video games like Bioshock Infinite and Fortnite).  Real actors provide the performance, which is motion captured, and applied to the MetaHuman.  This is groundbreaking stuff.

See their trailer plus my first test below:

I'm using an iPhone to Motion capture my face (which tracks every muscle in my face, plus my eyes and head position), and sends tracking data in realtime to control the MetaHuman's face and head in Unreal Engine.  Some of the lip movements are not there yet, but for the Alpha version, I'm impressed by how natural it looks.

I was accepted into their early access program to test it out.  When the full, improved version releases later this year, I think it could open up exciting new opportunities for films and video games.

I wish I had more progress to report.  But that's it for now.

Sticking with this project requires a massive amount of patience and understanding on your part, plus the tenacity of a Ginosaji.  I am grateful for all of you who have remained positive and supportive since the beginning.  It is still our plan to deliver a lot more than was originally promised, and we will.

Dear Friends of the Spoon,

Due to a family emergency, the Ginosaji project has been temporarily delayed.  The movie is absolutely still going to happen.  I apologize for the extended delay, and will update everyone as soon as things progress.

I also apologize for the long gap between updates.  I was reluctant to share personal info in a Kickstarter update -- but since personal matters have caused this delay, I will.

My Dad passed away unexpectedly last year, and since then I have been taking care of my Mother (who is severely disabled, and recently underwent surgery).  It's a complicated situation due to her serious medical issues.  As a result, I had to put everything else on hold.

If it wasn't for my Mother, there would be no Ginosaji to begin with.  She used to tell me Edgar Allan Poe stories when I was a kid, and instilled in me an appreciation for tales of horror and the macabre.  A retired registered nurse, she also served as medical advisor on the original film.  (Jack has more bruises on his face thanks to her input).

I ask for your patience and understanding as I deal with this challenging situation.  I am grateful to the friends and family who have been so supportive during this time.  As I said, I will update everyone as things progress.

First, undeniable evidence that the Ginosaji will never die...  In checking statistics on the short films, I was surprised to discover a massive tidal wave of new views in the past month -- turns out, a Korean subtitled version of Ginosaji vs. Ginosaji Pt.4 went viral in South Korea, resulting in more than a quarter million views in one day(!) and attracting a massive amount of new views for all the spoonkiller videos.

Over 2 Million Views in November!

Thanks to this new viral activity, our videos received over 2.1 million views just in the past month!

You can sort that list by Number of Votes, which is a measure of the public recognition of a film.

#3 is The Skeleton Dance by Walt Disney!

As befitting these massive statistics, huge things are cooking with the GINOSAJI movie.  Things are taking a long time to put together, but it is necessary in order to produce a vastly more epic movie!

Details will be revealed as the next big steps are made. Thank you for your continued patience! There is much, much more to come.